The science is better seen than heard 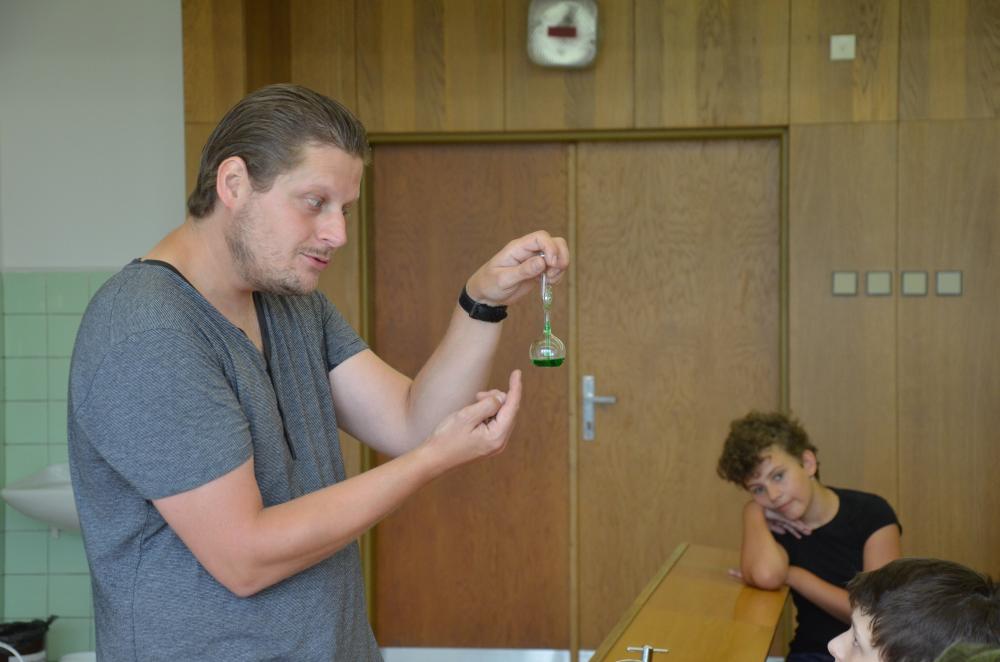 He lectures on energy science not only to university degree aspirants, but also to high school and primary school children. With the legendary popcorn popper, he has been going around popularization events for more than a decade, making him one of the most dedicated science popularizers in the country. Quite rightly, Dr. Petr Pavlik will now compete with scientists from all over the country for the title of "know-it-all of the year".

The finals of the first year of the competition of talented popularizers will take place on 13 September at the Scala cinema in Brno under the auspices of the Czech European Researchers' Night. In addition to Petr, who presented one of the most famous physics formulas ever - E = mc2 - in the competition video, five other academics from Czech universities will take part in the final. All of them succeeded in the competition of more than thirty participants. "The final should have the form of a so-called science slam, where your task is to impress the audience enough in a short period of time so that they learn something about your field," explains Petr Pavlík and adds that he has no clear idea about the exact form of the final evening, but the concept of his performance is already taking shape in his head. "It's a big unknown for now, but I don't mind, I like it. We still have the preparatory workshops, I'm looking forward to them. I like meeting new interesting people," he says.

Petr has been popularising science for more than a decade - he organises excursions, educational talks, lectures to children and adults and tours events for the general public with demonstrations of energy equipment. "I enjoy working with children. When I show them a simple experiment and they just hang up on me, it's a great feeling," he admits.

An interview with Petr about the art of popularizing science

You are definitely one of the most active popularizers of your field, not only at the Faculty of Mechanical Engineering, but maybe even at the whole university. Do you see it as a bit of a mission?

I don't know if I would choose such a strong word...(smile) It is true that I put a lot of time and energy into it. I simply enjoy it and I am convinced that it is needed. You know, during a discussion in high school, a girl told me that she didn't understand why we still have coal or nuclear power plants. That if it were up to her, she would shut them down immediately and replace them with energy from the sun, water or wind. At first I was angry, because that is nonsense that cannot be done. But then it dawned on me that the fault lay with me, or with us. We do not talk much about it, and then the radical environmentalists who say the opposite are given space in the media. That's when I realised that we needed to start doing more to popularise science. That's why, among other things, we created a talk called "Are renewables really clean?", where we talk about how many solar panels we would have to build to replace coal or nuclear power generation.

Tell me, how much?

Roughly 350 million panels covering an area of approximately 554 km2, which would hide Ostrava, Havířov and Hlučín under one big roof. Renewables are good, we support them. But no one in the media will tell you the other side anymore. You can't just switch to them at the snap of a finger.

What do you enjoy most about working with the young generation?

So do you have a tried and tested recipe for getting them interested?

There is no single one - because it depends on your audience. That's probably the most important thing. A good popularizer may have talent, but the rest is constant work and responsiveness to the group. Sensing how your audience behaves. Generally, though, it works if I get the kids involved. When I ask them questions and offer them demonstrations that they can touch. Science is better seen than heard. It's also nice if they take something away. That's why we're giving away popcorn and, this year, the popular espresso tonic, thanks to the fluid roaster.

Is there anything you think should change in the popularization of science and technology? What could be done better?

I think it's off to a good start. Ten years ago I didn't feel much support, which made my popularisation work very difficult, but today it is much better. In this respect, I have to give a special mention to Zlepši si techniku, who are doing an amazing work. I used to communicate with the schools myself, now they do this for me. Plus, they also provide the remuneration, which is nice.

There used to be a prevailing view in the university environment that popularization was useless, that we should just do science and educate. I've even heard the view that you lure a young person into a high tech lab. Which I think is nonsense. Of course, there may be a person who has scientific ambitions before graduation, and this may be an argument for them, but it will be the exception. In the large majority of cases, the applicant needs to be attracted to something. It's great that we realise this and are doing something about it - the Faculty of Mechanical Engineering in particular. We need to build a positive brand, to make ourselves known. It pays off not only in recruitment, but also in cooperation with companies. I recently made an important connection by giving a lecture at the Colours of Ostrava.